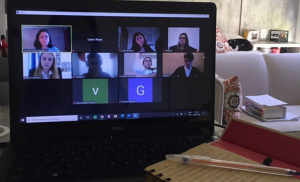 Since Oct 2019, the arbitration team of PUCRS’ Law School has been preparing for the 27th edition of Willem C. Vis Moot, today’s most important international commercial arbitration moot. However, the students who have attended the event since 2014, have a new challenge for 2020: join an online competition The decision to suspend face-to-face activities for the first time in history came as a strategy to combat the spread of COVID-19. The first panel will take place online, on Apr 4. Consequently, unlike previous editions, this year’s will not be held in Vienna, capital of Austria.

Despite the initial frustration, the members of the team accepted the new challenge and have been rehearsing for the competition. “Once we buried our frustration after the event was cancelled, we set up a new rehearsing routine to keep up with the challenge, to be followed virtually. Certainly the biggest difficulty for me in relation to the future competition will be to perform as good in the video as I would if I were there, as I consider persuasion a skill that is most effectively addressed face to face”, Carolina Magalhães says.

Although some changes had to be made for the team to continue participating in the competition, technology helps to bring people closer together. “On the other hand, practicing in front of the camera has enabled us to go further in our training. We face teams from different countries every week and we are making our presentation better”, Carolina says.

Since 1994, Willem C. Vis International Arbitration Moot has been held every year in Vienna, Austria. More than 300 law schools from around the globe participate in pre-discussions before the final rounds are held in Austria. The debates are always based on international sales transactions and involve issues of arbitration, such as jurisdiction and powers.

In arbitration, two or more parties choose an arbitrator (or set of arbitrators) to resolve a dispute. The rules to the procedure and its development are defined freely and in common agreement by the parties involved, who can resort to the regulations of any institution of their choice. The idea is to give autonomy to the parties, allow them to select dedicated specialists, as well as reduce the bureaucracy and time of the process. According to the Brazilian system, decisions made in arbitration courts are recognized will be as effective as a judicial sentence.