French cuisine at its best at PUCRS by Chef Erick Jacquin

Charisma, interesting stories and high-quality cuisine marked the visit of French chef to the University 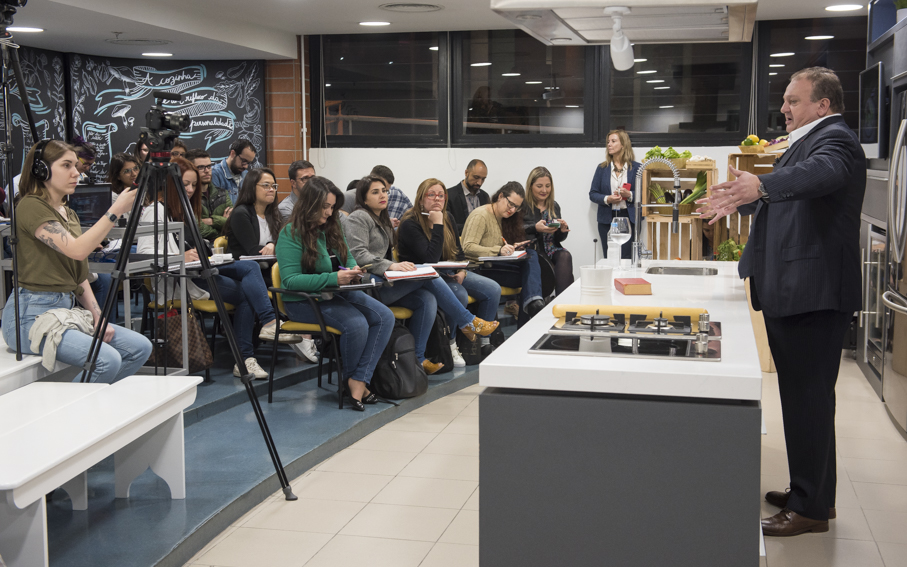 Put a generous quantity of experience and techniques in the kitchen counter. Add charisma and a light-hearted spirit. Pour in good stories, pinch some giggles and let it marinate. Bake some life lessons and entrepreneurship techniques together in oven. When serving, finish it with a lot of passion for the profession. This is what it takes for a cooking class by French chef Erick Jacquin, 53. The unique opportunity was given to students in the Graduate Program in Gastronomy and Author’s Cuisine (Gast) of PUCRS, in the beginning of October.

“I don’t know how I decided to be a chef, but I never imagined myself doing anything else”

As soon as he arrived in Porto Alegre, in the afternoon, Jacquin went to building 41 of PUCRS, to appreciate a whole structure put together for nutrition and cuisine. He was in the presence of the coordinator of the program, professor Rochele Quadros. He had the chance to visit every single part of the site: kitchens, cold chambers, tables and other areas where students can do practicum work.

He also met with PUCRS gastronome, João Pedro Bassano, 20, who is now a Psychology major. Bassano gave the chef a ceramics plate made by him to be used in the course Creative Process. He made the plate when he was working on his final project in the Gastronomy program. “It is such an honor to know that chef Jacquin can use my creation”, said Bassano. The initial visit also included the Auditório Pedagógico Cozinha Show (Cozinha Show Teaching Auditorium). When he arrived there, he open his suitcase and picked out a French dough roller in the middle of his suits, shirts and butterfly-ties. It would be used in his class on puff pastry. “As a kid, I always wanted to learn how to make puff pastry”, commented he.

In the beginning of class, Erick Jacquin talked about his life to an audience of 28 students in the room and 700 others online. “My mother told me that I used to play with pans since I was very little. At the age of 6 or 7, I used to help her a lot and I knew how to make crepes. Everything I know about cuisine I owe to my mother”, said he. “At the age of 11, my father asked me if I was sure I wanted to be a chef. He told me that I would have to work on Sundays and holidays, as everybody else would be having fun. I said yes”, said he.

His decision made him leave the small town of Dun Sur Auron, in the heart of France, and head to Paris, as a teenager. He had the chance to work in several restaurants and with Henri Charvet, the owner of Au Comte de Gascogne. That is where Jacquin started his career as a chef responsible for the kitchen. “We used to make 2 1/2 ton of foie gras every year”, added he. That was the restaurant’s specialty. The French chef added that his father was very true when he talked about the total dedication he would have to show for the job. Jacquin could not make it to his interment since he was very busy on that day. “Being a chef is quite a demanding profession. I could only say goodbye to him the day after”, declared he.

As he told his stories, Jacquin began making the puff pastry, the delicacy the two-day program on French cuisine was dedicated to. “To every kilogram of flour, please add 17g of salt, butter and a bit of cold water. Because we are in Brazil, temperatures are warmer”, explained he. As he was only able to finish the dish on Saturday, he describe the mise en place for a consommé and taught how to bleach vegetables and meats.

“It’s a great pleasure to be here. People in this part of the country like gastronomy and like good food. It’s such a beautiful region, the accent is wonderful.”

After years of experience in France, Jacquin was invited to come to Brazil. He admitted that he did not know much about the country other than soccer, samba and the Iguazu Falls. Back then, he did not even know where to locate São Paulo on the map. But upon arrival, he brought innovation and entrepreneurship. “I made the first petit gateau of Brazil, in 1994”, said he. As a chef and business owner, he recommends that people study hard since not having a degree to complement his job as a chef has caused him many problems. He had to shot down Le Brasserie, a restaurant he ran for nine years, in Itaim Bibi, São Paulo, on purpose, and that was such a bitter experience. Further details about it can be checked on an episode of reality show Pesadelo na Cozinha.

Lessons we learn from failure

Jacquin shared with the audience that he learned a lot from having to close the doors of the restaurant due to management problems, and that was such a traumatic experience. “I didn’t have any problems with the quality or with employees, but with the costs. Rental costs soared as every other costs did and the number of customers plummeted. So, I decided to shut it down instead of selling it and seeing somebody else working in my kitchen”, reported he. That was very costly to him, as he had to pay fines and dozens of labor lawsuits. After that traumatic experience, he was invited to join MasterChef Brasil, on Bandeirantes TV. “Television has changed my life. I was born again. In the past, I would be mad at someone, kick them out and they would take legal actions. Today, I still do that but I get paid by TV”, said he in a very cheerful way.

“The kitchen is the place where you share the best of you. We sell happiness through kitchen”

Today, Jacquin works for Bandeirantes TV and does consultancy work for two restaurants in São Paulo, one in Natal (RN) and another in Manaus (AM). He also delivers workshops, attends events and teaches courses, such as the one at PUCRS, which has been quite an enriching experience for him these days. “When I passed through the gate of the university, I told the driver: ‘I never went to school and now I’m going to teach’. In my opinion, this will be an experience both as a teacher and as a student. When I decided to be a chef, you couldn’t find cooking programs or schools. It’s not that I didn’t want to do it. Today, students have the chance to study and make use of the technology available. It is wonderful to have a Gastronomy program such as this one at PUCRS”, added he. As for being a national reference, with prizes and recognition from professionals and students, he was very humble: “Every chef must share everything they know with other chefs. Not like an obligation, but for pleasure to share. It’s part of the game”

“The word restaurant comes from restore, meaning doing over, starting over. Because of that, we have to provide our clients with the best experiences when they come to our restaurants”, warned Jacquin. “They are king, and we have to be attentive and make them feel satisfied. Today, we have no time to apologize. If you make mistakes, they’ll post a photo on Facebook. Then, it is important to know that the most difficult part of this profession is to please clients”, warned he. Despite his professorial tone, he did not hesitate to share an interesting event that happened to him with an “annoying” client.

“There’s no such profession as a chef, but a cook”

“One day, a client came to my restaurant and ordered the Fasano hotel dessert. As I wanted to make him happy, I had someone go there and buy it. The client said: ‘It’s great, it tastes like the one at Fasano’. I said. It is the dessert you get at Fasano. Here the client deserves the best, always. I told the register to charge R$ 150.00. The client complained to me arguing that it was too expensive. I told him: you wanted luxury, sir, I gave you luxury. Here the client deserves everything. But luxury comes with a price”, added he, as the audience bursted into laughter. 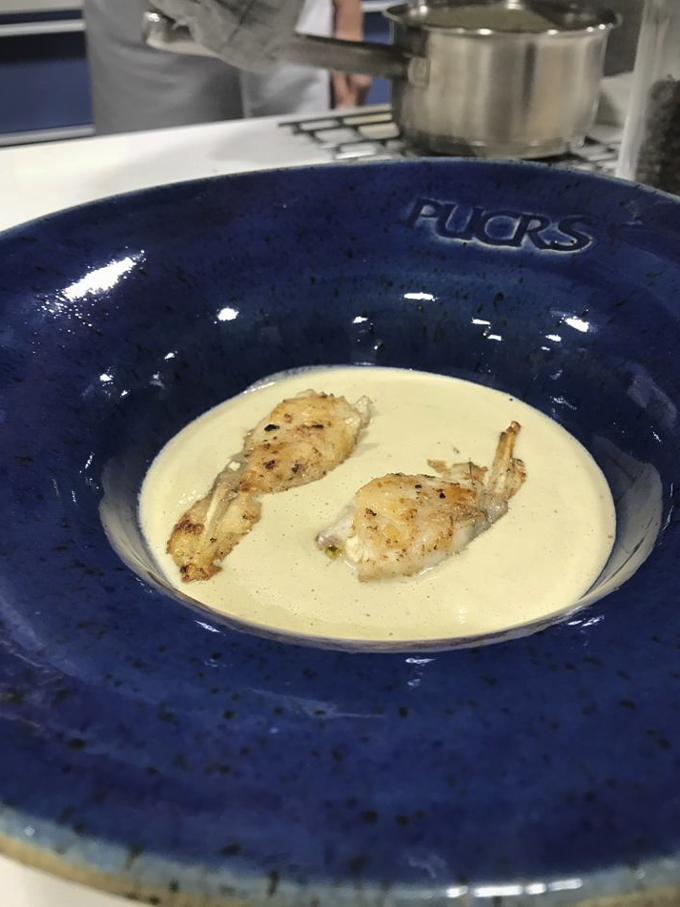 Student Eunice Silva, 38, has a degree in Tourism and Hospitality Management and another in Gastronomy Technology. She has run a functional gastronomy company for three years, as she gained a vast amount of experience in the hotel industry. In her view, bleaching techniques to make a classical consommé and the instructions on how to make puff pastry were the highlights of the course with Jacquin. As for deciding to pursue a different career, she claims that “dedication to cooking came a long way before I joined the event industry. Seeing people happy after eating makes me happy”.

Registrations for the online course of the Graduate Program in Gastronomy and Author’s Kitchen of PUCRS, are now open on this website. 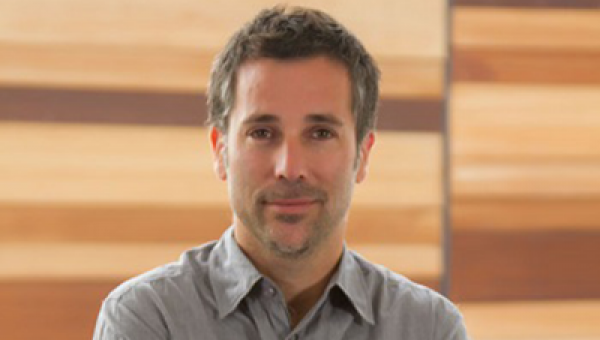 Graduate Programs
13/03/2020 - 08h53
Canadian researcher collaborates with project on health access barriers
This website uses cookies and other similar technologies to improve your experience on our sites, personalize the offer of programs and services and suggest content that may be of interest to you. As you continue to browse this page, you certify your agreement to these conditions.
X