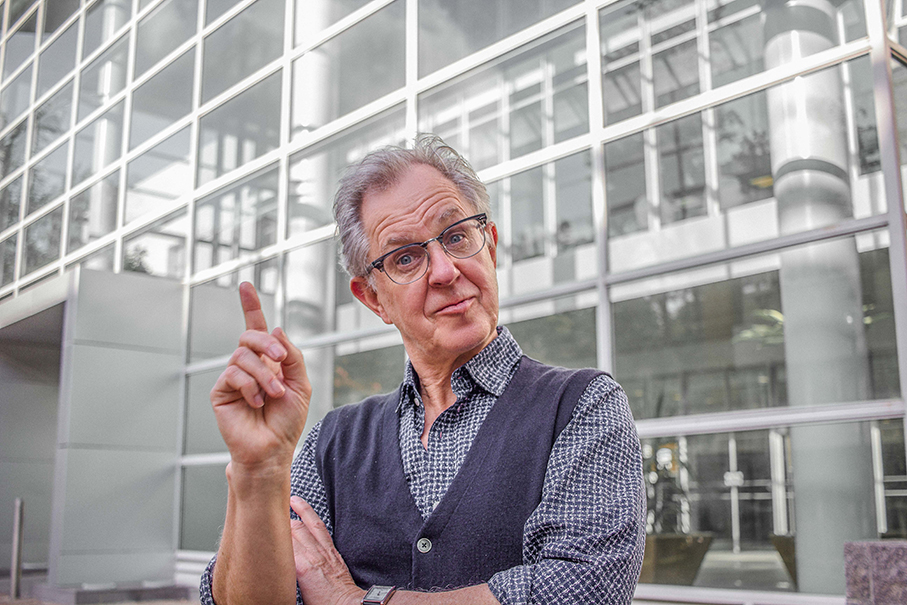 The world is constantly changing and this has a direct impact on education and educational systems. In order to keep up with these changes, schools and universities need to be attentive and find solutions to the new demands. On that line, on Jan 24-25, PUCRS welcomed one of the greatest references in educational policies in the world. Andy Hargreaves, a faculty at Boston College’s Lynch School of Education (USA), where he also serves as a researcher. He works for a number of other institutions, including University of Hong Kong (China), University of Ottawa (Canada) and University of Stavanger (Norway). He was invited to teach two classes in the program Transformative Education: Pedagogy, Fundamentals and Practices, of PUCRS Online Certificate Programs. The lessons were delivered in support of the course Learning to change: teach to transform, delivered by School of Humanities professor Dr Leunice Martins de Oliveira. The classes will be available online starting Mar 16.

The course is intended to assist students in understanding the moment we are living, under a complex thinking perspective in an effort to get them to think big. Thus, it advocates for the need of an educational reform, in view of the process of globalization of information and the possibility of schools revisiting their goals in this new scenario. In class, Andy presented some existing teaching models and induced students to think about how big changes affect education and classroom experiences.

For Hargreaves, the world has undergone major changes in the past ten years. These include technology progresses, the economic meltdown and the refugee crisis. And it has a direct impact on teaching and learning. “There are large numbers of people around the world fleeing wars, starvation and lack of opportunities. This makes them think about their identities, who they are and where they belong to. Many people from Brazilian families are going to North America. Some children have a father here and a mother in America, for example. So it is no longer a question of being Brazilian or American. The question is how can we be both? And how can teachers support this?”, he asks.

As for a transformative education, he believes that this is everyone’s responsibility. Leaders and governments must encourage education to be something inspiring and to make people understand its importance and its role within it. And, mostly, attract good teachers, give them a good salary and invest in their continuous development: “Once you are inside the school, what affects students’ learning most is not the curriculum, the facilities or the technologies. It is the quality of the teacher”.

Leading from the Middle and the importance of collaborating 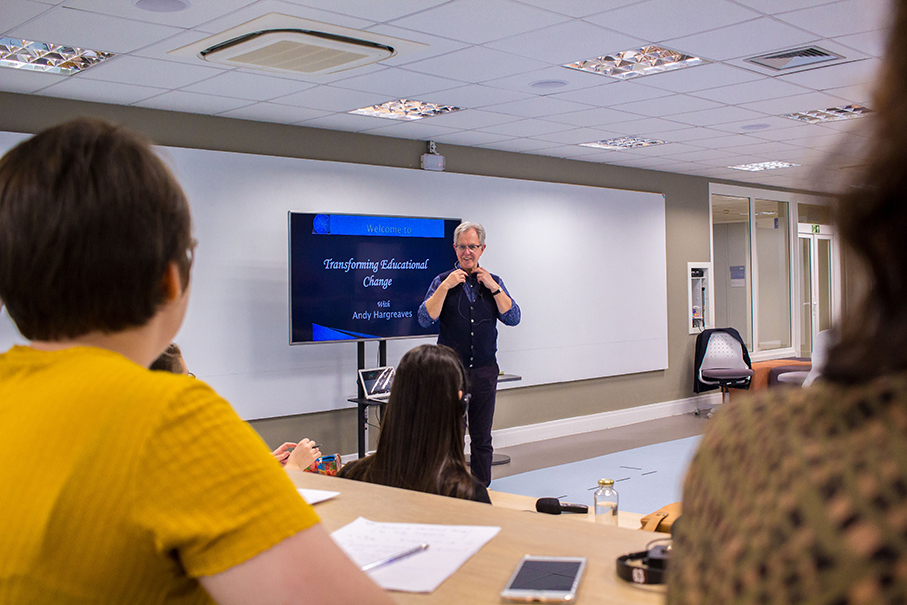 Today, Hargreaves dedicates himself to research into Leading from the Middle, an area of studies that is intended to create more equity, inclusion and wellness for students in a broader perspective. The way he sees it, this is an alternative to top down and to bottom up leaderships. According to him, there are two ways of thinking about leadership from the middle: one by looking at the middle as an intermediary, collecting the works from the top and delegating them to the bottom; whereas the other, a more interesting way, by giving power to the people in the middle.

In the case of schools, leading from the middle makes sense because whoever is in this position is also close to the students and the community. “Having power in the middle brings people together. With that, they learn from each other and understand the responsibilities as collective actions for each other’s success”, he adds. Hargreaves claims that teachers have more time to interact with one other, to support each other and to exchange experiences and knowledge. “It’s not like you learn to teach and stop. You are always learning to teach. I am 68 years old and I am still learning to teach. And that is what professions should be like particularly that of a teacher”, he concludes.

Andy Hargreaves served as president of the International Congress on School Effectiveness and Improvement and an educational consultant to the Premier of Ontario and the Prime Minister of Scotland. He has written more than 30 books and won several Extraordinary Writing awards – including the prestigious 2015 Grawemeyer Prize in Education for the Professional Capital (with Michael Fullan). He was also ranked by Education Week among the top 10 academics with the greatest influence on the US educational policy debate. In 2015, Boston College awarded him the Excellence in Teaching with Technology award.

The course Transformative Education: Pedagogy, Fundamentals and Practices features some of the greatest educators in the world, working on areas such as didactics, curriculum and methodologies. It offers students the opportunity to learn more about education and pedagogy from the perspective of complexity, creativity and empathy. The program has a minimum length of 12 months – nine for the curriculum courses and three for the development of a thesis – totaling 363 hours. Registrations are open on the website. At the end of the program, students will be entitled to a Certificate of Completion of a Certificate Program on behalf of PUCRS.

Another course that is offered under the PUCRS Online Certificate Program is Modern Education: Methodologies, Trends and Focus on Students. It also features renowned professors, such as Leandro Karnal, Luiz Felipe Pondé, Marc Prensky and Martha Gabriel. Registrations are open and students can choose either the on-site (starting in April 2020) or online versions of the program.