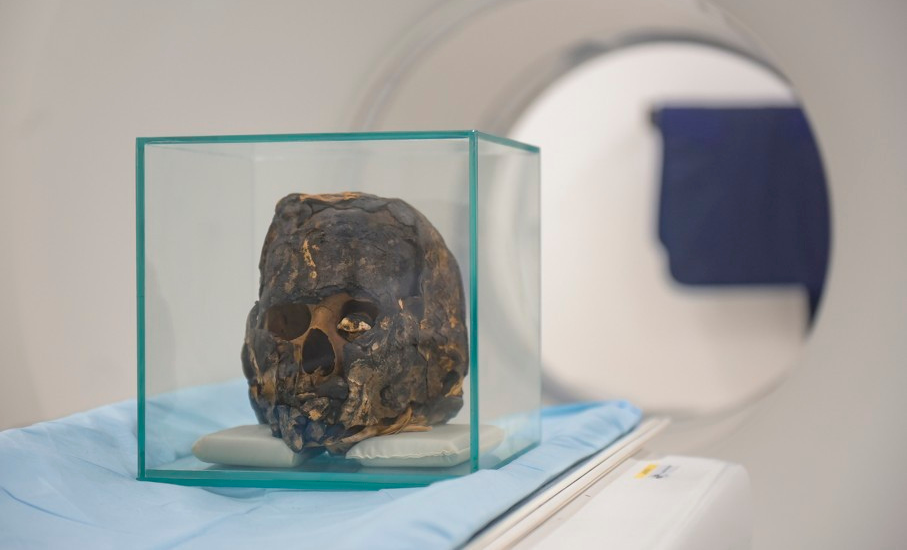 PUCRS researchers have found, after conducting tissue processing tests, that the head of a mummy aged from 2,495 to 2,787 years old contained intact cells. Iret-Neferet, as it was baptized, arrived in Brazil in the 1950s, in the city of Cerro Largo. The study has been recently presented in an event promoted by European Association for Osseointegration, in Berlin, Germany. The paper is an international reference and ranks highly according to Capes – Brazilian Federal Agency for Support and Evaluation of Graduate Programs (Capes).

The study was conducted by the siblings Éder Huttner, oral-maxillofacial surgeon and gerontologist, and Édison Huttner, researcher and faculty of the Graduate Program in History. Both develop work under the Study Group on African-Egyptian Identities of PUCRS’ School of Humanities. The investigation also included the work of Periodontics specialist Bruno Candeias.

The brothers signed an agreement with the Cerro Largo Museum, where the mummy is placed, to continue with their research on the topic for another five years. The way they see it, this is the first discovery of such kind in Brazil. The next step to take is to partner with the Max Planck Institute, from Germany, which specializes in DNA study.

Éder was responsible for extracting the tooth from Iret-Neferet for a U.S. laboratory to work on carbon 14 dating, which is a decisive way in determining how old the mummy is. The material was also processed and underwent histological analysis at the Laboratory of Pathological Anatomy at PUCRS’ São Lucas Hospital.

“The recently-conducted histology study allowed for us to visualize the morphologically intact red blood cells inside a blood vessel in the head. We could also see the structure of the bone tissues of the jaw and muscle of the masseter”, he explains.

The results showed the effectiveness and quality of the technology of the time in the mummification process and make the development of further studies on the Genome and Proteome possible.

A new phase for Brazilian Egyptology

Édison goes on to say that, in addition to the historical importance, the discovery also has an impact on the understanding of the health of humanity. “Naturally, this research will serve as the foundation for other studies and will become a reference in Brazil, Latin America and even all over the world, especially in the preservation and study of human health”.

Behind the mummy’s head

Iret-Neferet arrived in Rio Grande do Sul as a gift from an Egyptian to a resident of Cerro Largo. It was donated to the 25 de Julho Museum, in the same city, in the late 1970s. In 2017, Édison visited the museum and began the research. In July of that year, the head of the mummy was on exhibit at Irmão José Otão Main Library, on the Main Campus.