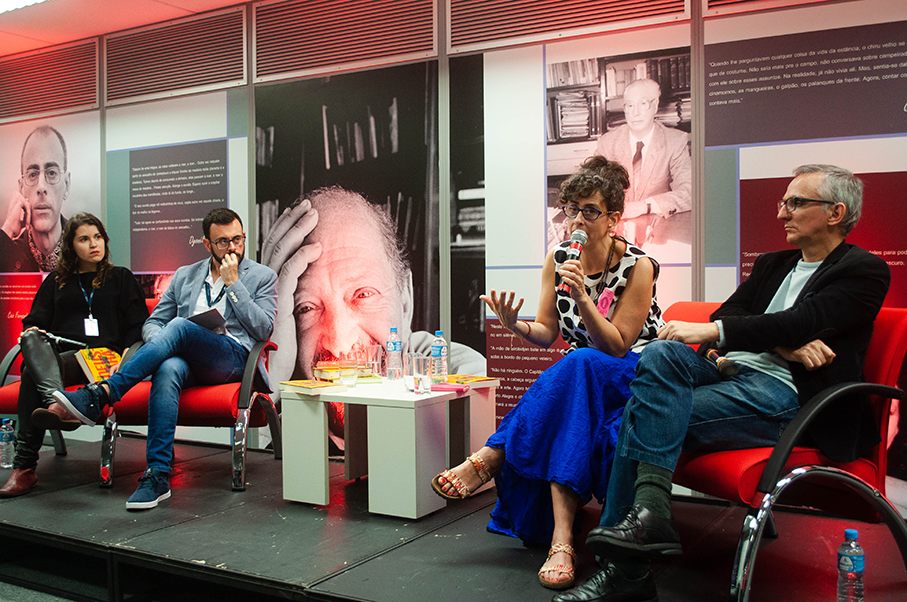 Novelist and journalist Alexandra Lucas Coelho released the book Deus-Dará at the Institute of Culture of PUCRS. In the words of School of Humanities professor, Dr Paulo Ricardo Kralik, Alexandra is “a native of Portugal whose heart is transatlantic”. In the session, she shared her experiences and reflections of Brazil with the audience. She also shared her inspiration for writing the book, which presents a critical and historical view of Rio de Janeiro and Brazil, in the voice of seven characters.

She talked about the most important issues in the book, such as colonization, slavery, culture and politics. The following professors joined a round table: Kralik, Moema Vilela (School of Humanities) and Juremir Machado da Silva (School of Communications, Arts and Design – Famecos).

The conception of the book

In 2010, she came to live in Rio de Janeiro as a correspondent for Portuguese newspaper Público, as she was particularly interested in learning more about the culture and politics of Brazil. For two years, she dived down deep into the history of the country. Her initial idea was to write a book that depicted the city of Rio de Janeiro. “Everything changed during the 2013 demonstrations and the visit by the Pope, as I put the writing of the book to the side and decided to get myself immersed into the reality. When I came back home and decided to work on the book, I felt that something was wrong, since 2013 felt as a dark hole in the history of the book and of Brazil”, she commented.

In view of these facts, Alexandra bore in mind that she needed to work on a historical perspective. This drove her to research historical documents, such as letters and photos to include in the book.

When she was asked by Juremir Machado on the historical frontier between literature and journalism, Alexandra claimed she was much more inclined to believe in a rupture between narrative freedoms and commitments than the classical binomial reality x fiction. “Journalists are committed to rules, laws and the readers. Because they are the ones who are going to make a difference in order to address a particular issue. Novelists, on the other hand, have more freedom to adapt and create their own narrative.”

Despite the differences, she is interested in reality even if literature is not concerned about truthlikeness. However, she firmly believes that being a reporter helped her be aware of reality to understand Rio de Janeiro, in an effort to build the clarity, conception and vertical character of the book: “In my journalistic writing, I used to be very obsessed with rhythm and made a point to include this in my book when I wrote sentences and double-checked words.”